The world didn't end but we're still the same

Charlie Chaplin's words some seven decades ago from the 1940 movie The Great Dictator is probably the greatest speech ever.
We've progressed, but only with more fancy machinery. Humans still are the same, if not worse.
From the regular corporate back-stabber to the warring factions of governments and rebels, there's less decency in the world. People twist their words and are more brutal in their actions, all fueled by greed not just to gain for themselves but to bask in the demise of others.
WE didn't need the world to end according to the Mayan calendar on 21-12-12. The way we're existing, when you look at Syria, Gaza, Liberia, the child-killers of the US... there's so much hate that for some of us the world existing is worse than if it all did end.
Posted by Arnaz M. Khairul at 11:44 AM No comments: 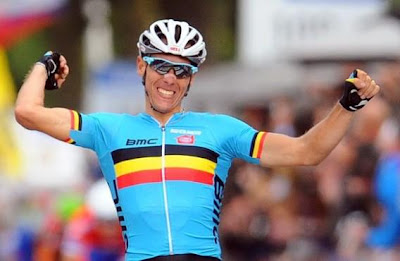 I'd like to congratulate Philippe Gilbert of Belgium and the BMC Racing Team for a truly remarkable victory achieved in the UCI Road World Championships road race in Limburg, Holland on Sunday.
No other rider in that front pack would have had the balls to attempt what he did - a solo attack in the final 2 kilometres from a lead pack of about 30 riders that surged towards the finish at breakneck speed.
Truly one of the best victories and one of the best performances in winning the right to wear the rainbow jersey over the next season.
Posted by Arnaz M. Khairul at 10:16 PM No comments: 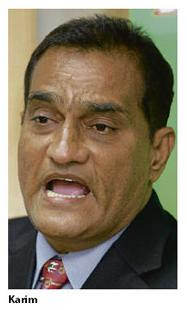 Not many are worthy of such a statement from myself as Karim Ibrahim, the controversial but long-serving personality in Malaysian athletics that from today finally becomes FORMER Malaysian Athletics Union (MAU) deputy president.
It has been 19 years of destruction, in my humble opinion, that athletics has gone through especially with him having a hand in every possible controversy within the sport at least since I began as a sports writer 12 years ago.
My last brush with this character was a harsh one in the defence of the work of my former assistant sports editor S. Selvam, whom Karim had maliciously tried to discredit amongst fellow sports journalists as we sat at the Wisma OCM coffee house after a function in 2006.
It was not the first time I had found Karim to be up to such tricks. There he was, while answering questions about a controversy over a dubious plan to send athletes for a foreign training stint.
"Satu saja saya mintak tolong, you all jangan refer pada artikel Selvam. You tengok apa dia tulis, ini memang jahat punya orang," Karim blurted out of his mouth without noticing me sat at the next table with my back towards him.
"Macam ni punya reporter memang ada agenda jahat. Dia mau serang kita saja."
I listened as this carried on until I just had enough. Without even offering him my respect of standing up before addressing him, I just turned towards him and said:"Ya, kita memang jahat. Orang macam you kita mau kasi buang."
Karim, to his credit has had his supporters from within the sport and the press for long periods of time. Finally, there is some sense which never surfaced as Karim continuously somehow maintained a stranglehold on the sport. There is some justice which took a long time in coming.
Let's leave it at that. Alhamdulillah.

It started of with this fat Korean rapper doing this:

That sparked a parody craze which Malaysians have gone mad about

We now have KL Style:


The Historical City of Melaka Style:


They even made one for Hari Raya:


Malaysians have gone mad... So mad that Red FM had to come up with some aid:


Must say, this Psy without the "Cho" to complete his name must have done his parents proud.

I would turn 15 just six days later and in those days as any football/sports fan in this part of the world would attest, we craved every bit of live coverage.
It didn't matter which team we supported, a live football match or any match on TV would be an event not to be missed.
There I was in front of the TV at home (no viewing at mamak stalls in those days) with my little three-year old brother, who'd tragically would grow up to be a Liverpool fan, struggling to keep his eyes open, but excited about what I was staying up late for.
It was Liverpool vs former greats Nottingham Forest at Sheffield Wednesday's Hillsborough ground for an FA Cup final on April 29, 1989. It must have lasted about 10 minutes before we were left shocked, as these scenes unfolded. 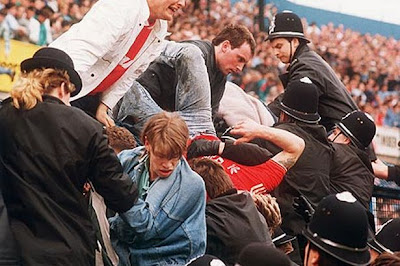 At the time, the beginning of it seemed like just loads of people crashing over the steel fences and overflowing onto the pitch. Then scenes of Kenny Dalglish crying further explained the inexplicable. Something really bad had happened.
It was the following day's news reporting 96 people were killed in the stampede that really brought a new, shocking perspective into my understanding of football and sport in general at that point in my life.
No account of mine though, can ever be as chilling as THIS, a first person account from survivor Damian Kavanagh.

May those unfortunate souls rest in peace.
Posted by Arnaz M. Khairul at 4:25 AM No comments:

Arnaz M. Khairul
Sports writer with the New Straits Times Malaysia. South East Asian delegate for the International Association of Cycling Journalists (AIJC). Just jotting down notes and putting up pictures as I live life. This is the diary I always thought of keeping.

Other blogs and sites